Home AudioSound 101 – Part 3: Get the best sound quality from your phone

It’s a common saying that the best camera is the one you have with you, and everyone has a smartphone.

For businesses, it’s our little magic box that does everything from checking email, sending messages, signing contracts, interacting with social media and a little bit of Angry Birds on your lunch break.

The thing is, is it the best device for audio recording? Actually, it’s not half bad. When shooting video for your business promo, webinar, interview or event, a smartphone can be a hugely helpful tool.

What Can I Record With a Smartphone?

Just about anything. The world is your oyster. However, one thing to remember is that the smartphone microphone is built for you to dictate into and make phone calls. It isn’t made for professional videos, so the audio is not going to be perfect.

But, that doesn’t mean you shouldn’t use it to record your video!

You can use your smartphone to record:

Still, there are a few things to keep in mind. Preparation is key, especially with a smartphone. Remember the application is consumer, not professional. So, it will take some extra work. But it is very doable!

Since the smartphone is such a multi feature device, you want to prepare it for filming. Even if just doing a quick family video, it’s really easy to throw the phone into Airplane Mode quickly with just a swipe. With Airplane Mode activated, an incoming call or text won’t interrupt your recording.

If filming a video for business, this is even more important.

Turn off notifications by putting the phone into Airplane Mode and Do Not Disturb Modes.

Have Enough Space to Record the Video

There is nothing worse than recording a video, only to see it stop half-way through because you’re out of space. For a 2 minute video, try to preserve at least to 2 GBs of space.

The internal microphone will record the video in Mono and very likely compress the audio. This means it will take up less space, but also lessen the quality of the audio.

Consider downloading a third-party app that allows you to play with the settings and turn up the quality. This will take more space.

Place the Phone Closer to the Subject

Get as close as you can to the subject without ruining your video frame. The internal microphone on smartphones is not very strong, so the further you are away, the harder it will be to get a good pickup. Too far and you’ll get an echo. Too close, and you’ll max out the sound (called gain) and have a bad audio pickup.

Consider What IS Close to your Smartphone

We go deaf to common sounds around us. We may not hear the constant hum of the fan or the honking horns on the street, because we’ve grown used to them over time. The camera, however, records them all.

Avoid, if at all possible, recording video next to an air-conditioning unit, a window, a doorway, or a fan. If recording outside, be aware that wind may go over your microphone and ruin your audio.

In my office, an ice cream truck would pull up across the street every day at 3 p.m. and play its annoying little tune for what seemed like eternity. I didn’t hear it, but my customers sure did.

Be careful of what’s happening outside as much as inside.

If you can make the purchase, get a microphone that can be used as direct pick up. The headphone jack on smartphones doubles as an input jack.

Avoid Using a Microphone With Headphones

Aside from the video looking unprofessional (you ever see Katie Curic or Wolf Blitzer with a pair of headphones?) it’s also going to be a horrible pickup.

The microphone will pick up any movement in the cable as noise, and it’s really hard to get a constant sound out of the microphone. A tell-tale sign that someone used a microphone from headphones is when the cable can be heard brushing against the subject’s clothing.

Even holding it up to your mouth isn’t going to be consistent for the whole video.

A DIY Trick to Get Better Sound

Ever notice how recording in loud places turn your audio track to static? That means the ambient audio was too loud and the software in the phone adjusted your sound. In tech speak, the gain was too much.

In DIY speak, “you should have brought tape.” As in Scotch tape.

Just place a small piece of tape over the microphone holes on your phone and it will reduce the amount of sound that’s able to enter the mic. In quieter situations, this doesn’t work, but in louder situations, it’s pure magic.

Tell us about your audio set up in the comments! What works for you? What doesn’t? Have you upgraded to a straight microphone instead?

Be sure to catch the next blog in this series – Sound 101 – Part 4: Use a phone as a secondary audio source.

Until then, Fake It ’Til You Make It. 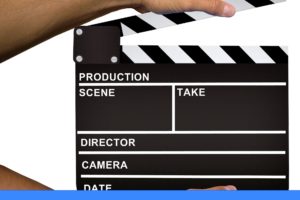 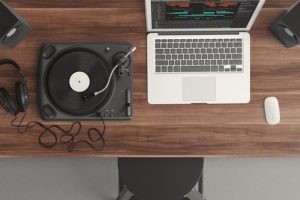 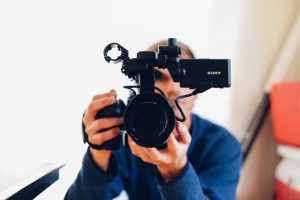 Top 5 Things to Avoid When Recording Your Own Video